Adventure ‘out back’ and ‘down under’ in Chillagoe caves

Is this on your 2021 bucket list? Enter the Queensland National Parks camping giveaway for your chance to win a $100 camping voucher.

Ready for an epic adventure? Think 'Raiders of the Lost Ark' or 'Journey to the Centre of the Earth' type adventure … The kind of trip where you venture into the outback, descend deep underground to unearth breath-taking, eye-sparkling treasures and return home in time for dinner. Sound enticing? Read on!

Chillagoe-Mungana Caves National Park is one of far north Queensland’s best-kept secrets. Why? Most of the action is deep underground—a labyrinth of caves, caverns and passages, formed by dissolving of the limestone bedrock over eons (we’re talking 400 million years). To be part of this action you need to journey, not quite to the centre of the Earth in a volcanic vent, but down narrow passageways and steep winding stairs lit only by spotlights, or into wide echoing chambers with lanterns held high. Hidden under a veil of darkness, you’ll discover the spell-binding natural beauty of limestone caves!

The above-ground landscape is pretty awesome too, with limestone outcrops and bluffs towering above the savannah. And an intriguing historical ruin that has provided a distinctive backdrop to the Chillagoe township for more than a century.

All this, and it’s only 3 hours' drive west from Cairns (or 2 hours from Mareeba). If you are travelling the Savannah Way, the Ootan/Chillagoe Alternative Route will lead you to Chillagoe.

With 3 ranger-guided cave tours each day to choose from, as well as walking tracks to explore and the region’s mining heritage to discover, you’ll probably need more than a day. To help you plan, here’s our Chillagoe top 5 'must dos'.

1. Uncover secrets of an underground world—Donna and Trezkinn cave tours

Don your sturdy explorer’s shoes, add a layer of clothing (caves can be cool) and grab your Indiana Jones hat (but leave the whip behind)! Prepare to encounter golden idols and angelic spectres … but not perhaps ancient booby-trapped temples or Egyptian artefacts!

Move over Indiana Jones—our knowledgeable Park Rangers will keep you enthralled as they guide you through caverns and dark passageways, shining the spotlight on achingly-beautiful cave formations. See the massive ‘Chandelier’ bathed in golden light and ’Madonna’ gleaming softly under illumination. We’ve installed electric lighting and stainless steel walkways to make your journey to the centre of the Earth easier—no need for magnesium flares or mine carts!

And while we can’t promise vortexes of flames or exploding heads, our cave tours are almost as exciting! Afterwards, you’ll talk with some authority about stalactites and stalagmites ('tites hang from the ceiling, 'mites grow up from the floor), not to mention columns, flowstones and draperies!

And, you’ll explain to anyone who will listen how rain mixes with carbon dioxide in the air to form a weak acid that slowly dissolves limestone to form caves, over hundreds of thousands of years …

Tip: You do need to be reasonably fit and agile—you’ll climb up many steps to the cave entrances, then clamber down steep stairs and narrow passages into the caves. 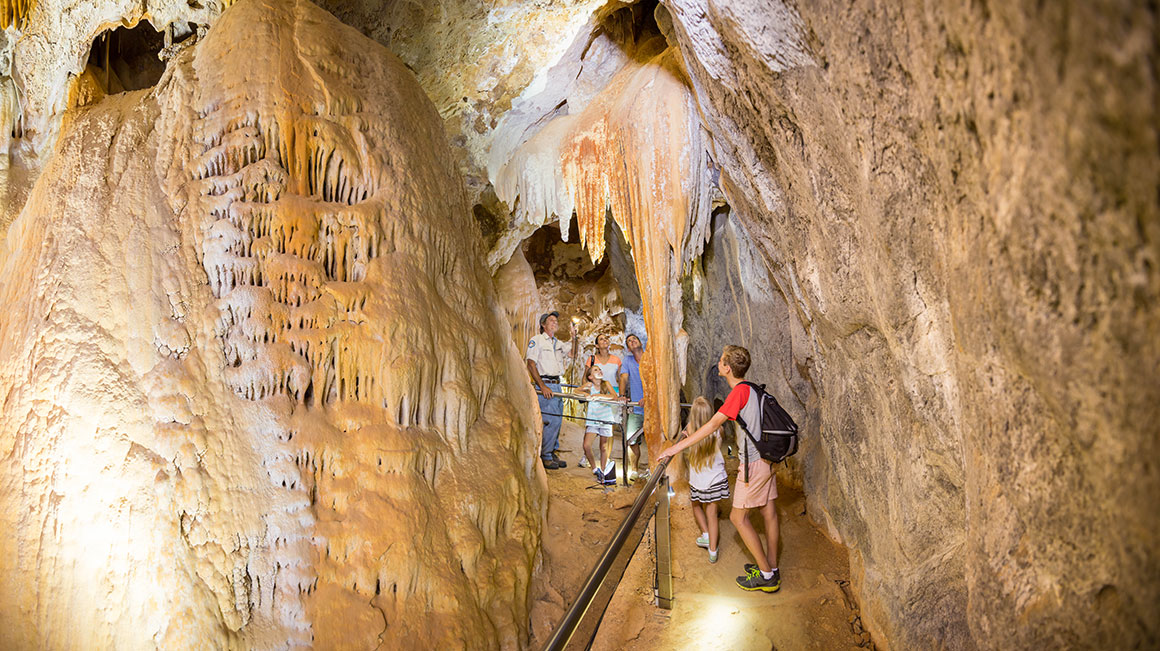 Harry Potter’s ‘Chamber of secrets’ held a monster basilisk, but you’ll be more likely to encounter darting micro bats, white-rumped swiftlets (tiny birds that echo-locate like bats) and, perhaps, spotted pythons in the secret chambers of the Royal Arch cave.

On the Royal Arch cave tour, you’ll explore one of the largest cave systems in the area, following your Ranger guide through a labyrinth of dark passages and huge echoing chambers with unexpected shafts of daylight. With lanterns held high, you’ll discover naturally-sculptured limestone formations, identify ancient marine fossils and marvel at the tangle of fig tree roots delving into the darkness from above.

Luckily, not a ‘whomping willow’ in sight!

This is the most suitable cave tour for anyone with mobility difficulties. Royal Arch Cave tours are 1.30pm daily (fees apply). 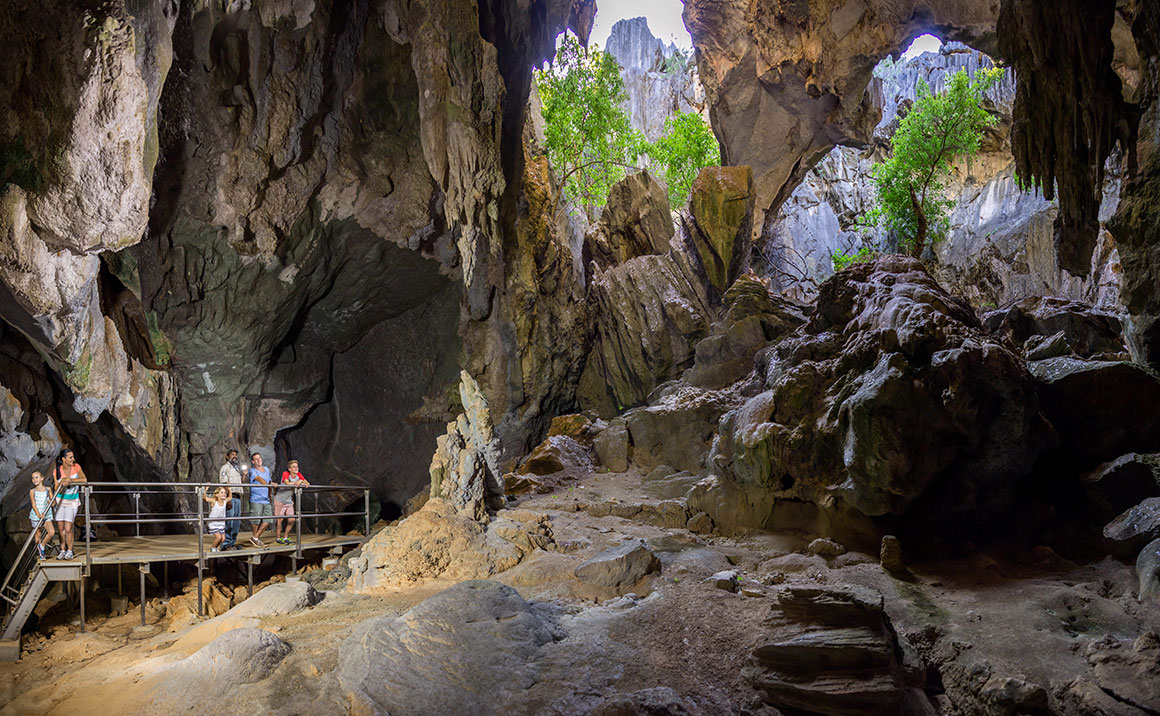 3. Take your own journey to the centre of the Earth

If you’re keen for something more adventurous, and have the right gear—torches and sturdy boots (not to mention knees and ankles!)—you can explore several caves on your own.

Pompeii and Bauhinia caves are true scrambling, boulder-hopping caving adventures! Clambering through the cave entrances will feel a bit like traversing Jules Vernes’ volcanic vent but, once through, you’ll find surprisingly large caverns inhabited by micro bats and decorated with limestone formations. All that’s missing from your journey is the hot magma, geysers, carnivorous plants and Giganotosaurus…

Before you set out, make sure you chat with staff in The Hub to find out all you need to know. 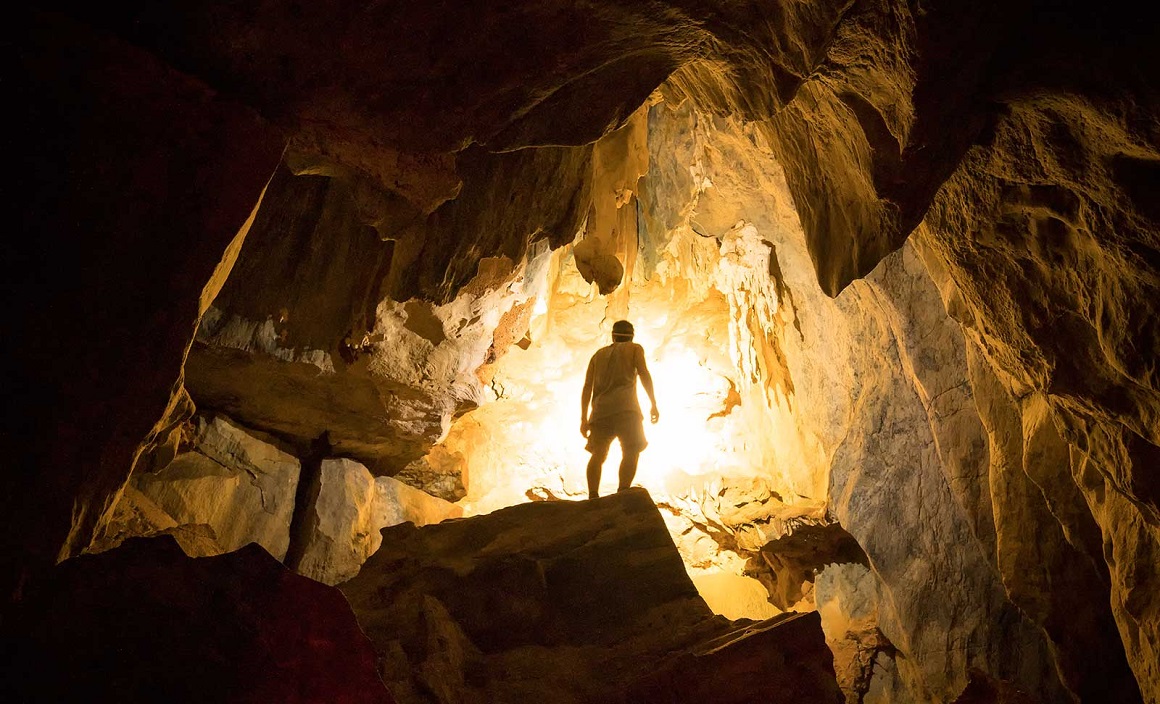 Chillagoe’s best features aren’t all below ground—make sure you check out the most amazing balancing act in town! And we’re not talking about a circus, although you will be every bit as spellbound by the ’equilibristics’!

Chillagoe’s Balancing Rock is an immense limestone outcrop, weathered over millions of years into a tall tower or boulder that appears to balance on its (improbably narrow) base.

A short stroll brings you to the base of the rock, where you can take a moment to enjoy the view over the surrounding woodlands and marvel at the ‘balance of nature’.  And, of course, take the obligatory 'selfie' in front of the rock. No acrobatics, please! Out-of-control mining carts began the journey to the centre of the Earth but at Chillagoe Smelters, the mining remains are somewhat more sedate! The rail tracks are unused, the rusting remnants of once-innovative machinery lie silent, and the tall chimneys stand sentinel over the township, as they have done for a century or more.

A short drive from town brings you to this important heritage site. From walking tracks and viewing shelters, gaze over the ruins of the powerhouse, blast furnaces, chimneys and slag heap. Imagine the scene of this industrial site in its heyday during the early 20th century—a gritty bustling workforce sweating in the harsh conditions, heavily-loaded ore trains carrying copper, silver, lead and gold, and red-hot furnaces feeding smoking chimney stacks.

Tip: Stay on the walking tracks as most of the site is a restricted access area to protect public safety.

If you have time, stay for sunset at the Smelters. The outback skies put on a glorious show as the sun goes down—this is your chance to capture the ultimate sunset photo! 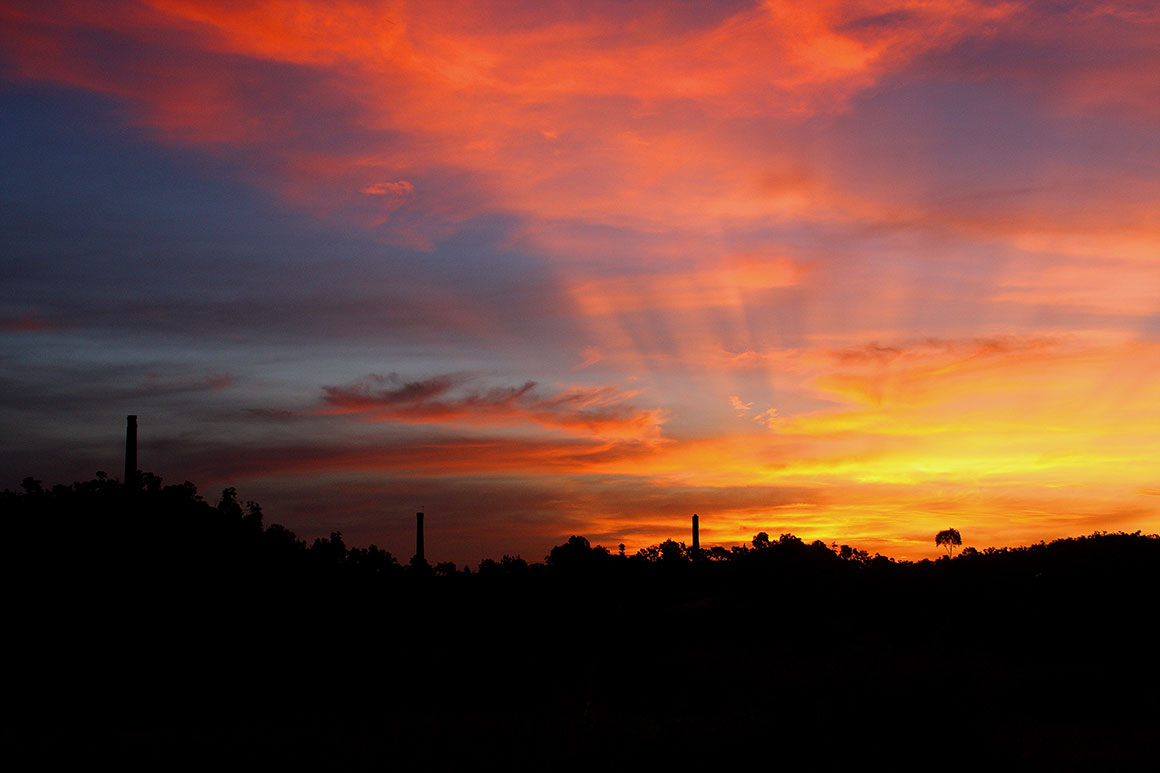 Now you know where to find adventure and excitement ‘outback and downunder’, check out more about Chillagoe-Mungana Caves National Park and get in early to book your ranger-guided cave tour. Always check Park alerts before you go.

The Department of Environment and Science acknowledges Aboriginal peoples and Torres Strait Islander peoples as the Traditional Owners and custodians of the land. We recognise their connection to land, sea and community, and pay our respects to Elders past, present and emerging.